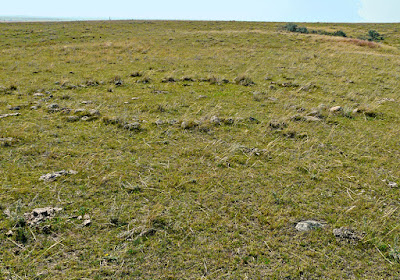 Easily overlooked, they appear as random stones to many who walk across the prairie. Circles of stone in the prairie grass, often on ridges, overlooks, four-star views, sometimes hidden by accumulations of soil and thatch.
There is some debate about their purpose and use. The understanding in past centuries was that they were used for holding down the edges of the tipis used by plains Indians. As you pass through the northern Great Plains, you may note that the winds remind you of those found on Jupiter, especially as a low-pressure system passes through in the colder months. But today, some take issue with the term "tipi ring", believing they may be ceremonial arrangements of stones. Hence, they are no longer called "tipi rings" by some.


In any event, the Hind Expedition of 1858 observed:
"On the banks of the valley the remains of ancient encampments in the form of rings of stones to hold down the skin tents are everywhere visible, and testify to the former numbers of the Plains Cree."
Another anthropologist stated in 1889:
"The Indians claim that the stone circles mark the places where in former times the tepees of their people were located, and that the bowlders held down the edges of the skin tents in place."
Nicollet observed in 1838:
"One mile from the Traverse des Sioux, and on the bank of the river, are the remains of an Indian camp; the circular area of which is still indicated by the heaps of stones around each lodge."
Barrow observed this firsthand in the 1880's:
"The typical tepee was a conical lodge of specially tanned elkskin stretched over a framework of perhaps twenty-five skin peeled lodge-pole pine. The bottom of the tepee was held down by stones."
And so forth.
Here is a bulletin from the Smithsonian that contains numerous testimonials:
https://repository.si.edu/…/bae_bulletin_173_1960_62_417-47…
And an 1889 report describing ceremonial stone sculptures near Watertown, SD:
http://onlinelibrary.wiley.com/…/1…/aa.1889.2.2.02a00040/pdf

Posted by David Schmoller at 12:07 PM