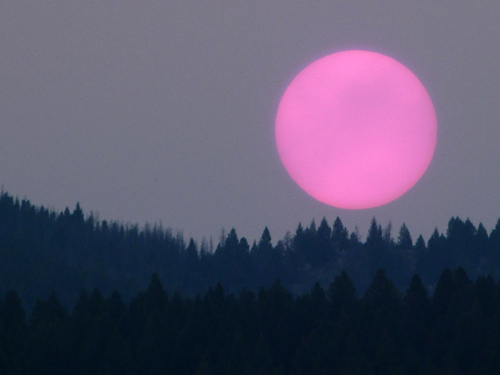 Probably from the Mustang Complex Fire along the Montana-Idaho border. It burned 332,000 acres or 518 square miles, about twice the size of Chicago or 2000 times bigger than Disneyland, which may have a thrilling, all-ages amusement ride involving fire and Bambi, but we are not certain.

It is the end of the year and this is a good time to review the list of the wildfire acres in the US for the past 58 years (data from the National Interagency Fire Center).

*** Update: Since this was posted on January 1st, the final numbers for the 2017 fire season came in and it proved to be the second-worst fire season since 1960, surpassing the 10 million-acre mark for the second time. ***

Plot this on a graph, describe the slope of the line, and see where it leads you in say, 20 years, at which time you may reminisce about the days when you didn't camp in fireproof tents.

Posted by David Schmoller at 1:13 PM