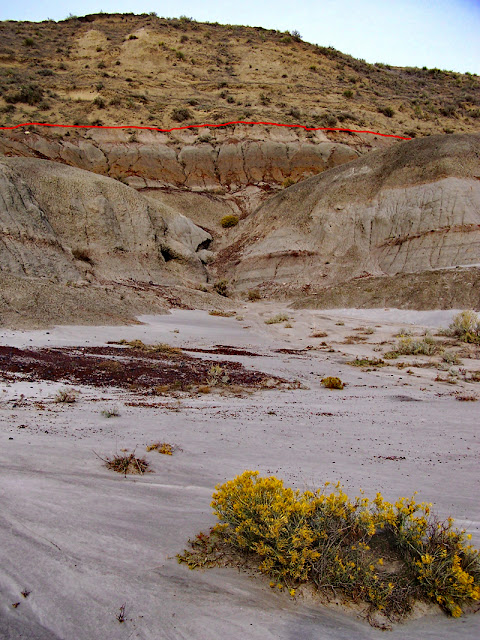 Of moving-pictures fame, the Hell Creek formation is a series of greyish, mostly bedded, freshwater claystone, siltstone, mudstones, and sandstones and lesser amounts of lignite. Notice the rust-colored rocks in the foreground. In our travels, that has been a telltale marker of the HCF. It was deposited during the Cretaceous period at the end of the Mesozoic Era. It contains sedimentary features such as siderite nodules, mud cracks, raindrop impressions, ripple marks, and bird and animal tracks. It has produced many excellent and renowned dinosaur skeletons, including Triceratops and Tyrannosaurus rex.
The Ludlow formation is of more recent origin and lies on top of the Hell Creek formation and dates to the early Paleogene (Tertiary) period at the beginning of the Cenozoic Era. Much like the Hell Creek formation, it is composed of bedded claystones, siltstones, mudstones, and sandstones interlayered with lignite. It is distinguished from the Hell Creek formation by the persistence of lignite and a brownish hue.
The fossil is likely to be a fragment of a Triceratops shield, with what appear to be the blood vessel tracks. There are innumerable Triceratops fragments scattered across the Hell Creek Formation. Ultimately, the species was the victim of the Cretaceous-Tertiary (K-T) extinction event, wherein three-quarters of the earth's plant and animal species went extinct in a very short period of time, including almost all dinosaurs, many marine invertebrates, many land animals, and many angiosperms. Current theory holds that it was caused by a celestial Doomsday Machine, a meteor that hit the Yucatan Peninsula with the force of 100 million atomic bombs, incinerating terrestrial life with an infared radiation pulse, dusting the planet in iridium, shrouding it in darkness and sulfuric acid aerosols, and plunging it into an impact winter.
Should have sold while they had a chance. 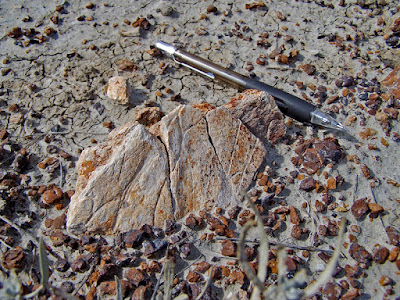 Posted by David Schmoller at 12:52 PM