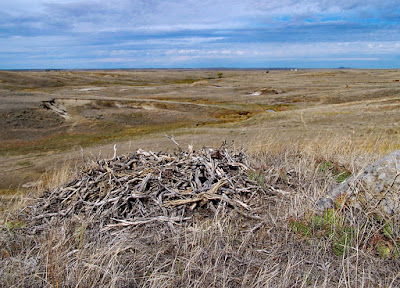 This is probably a Ferruginous Hawk (Buteo regalis) nest. It's made out of Artemisia cana sticks, in an isolated location, no closer than 1.43 miles from any human habitations. No bones, feathers, or other signs of activity at the time of the photo.
No surprise. In the early 1900's, North Dakota was referred to as the "ferruginous-rough-leg state" because of the abundance of the species. At that time North Dakota had vast, unbroken prairie, ideal Ferruginous Hawk habitat. The hawk thrives in expansive, open, arid grasslands and shrub-steppe communities.
But that was then. A century of agricultural, residential, and commercial development has degraded their habitat. Thus, their numbers have declined across their range.
Here are some details: Ferruginous Hawks are very susceptible to agricultural or human disturbance. They will select nest sites to avoid human habitation, avoid nesting within 0.7 mile of an occupied building, and may be less productive in areas with disturbance, or may abandon nests if disturbed too often by human activity. Historically, nests were most often ground nests on grassy overlooks in native prairie, less often in trees or rocks, occasionally in peripheral, isolated trees. More recently, due to pressures from predators, their nesting preferences have become isolated trees, haystacks, and power line towers.
This preference for large, unbroken habitats suggests that Ferruginous Hawk is an interior species. Interior species are adversely affected by highly fragmented habitats and prefer the interior of large, unbroken, relatively undisturbed habitats. Here is a quote from the USDA:
"Fragmentation of a landscape reduces the area of original habitat and increases the total lineal feet of edge, favoring species that inhabit edges at the expense of interior species that require large continuous patches. Ecologists, such as Wilcox and Murphy, believe that habitat fragmentation is the most serious threat to biological diversity and is the primary cause of the present extinction crisis."
Extinction crisis. That's for another day. Should I live to see it.
https://prod.nrcs.usda.gov/Internet/FSE_DOCUMENTS/nrcs144p2_015259.pdf
Posted by David Schmoller at 12:24 PM